As every year i made my own personal list of best albums released this year,
but this year was a difficult choice.
IMHO not one 'classic album' was made last year, unlike in 2008.
( - Last year's Last Shadow Puppets album was perhaps even the best album of the decade, and albums of The Faint and Grace Jones are still on my personal playlist )
This list is based on my personal favourite albums, albums with the most tracks with 5 stars ended higher on my top-5
It has become a strange list this year with a lot of danceable stuff in it... and i like it! 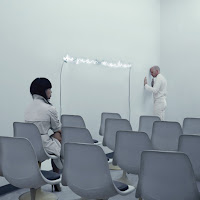 1 The Juan Maclean - The Future will Come
..as a bonus i advise you to check their website and 21+ minutes live-performance of 'Happy House" that they did earlier this year in Chicago.

5 Calvin Harris - Ready for the Weekend

> 3 artists that almost (but didn't) made it to this list ( in random order ):
Friendly Fires / Jesse Rose / Editors ....too bad for them, but great albums anyway <

Like i said, it's not your average list, perhaps bands you have never heard of.
Check them out, and let me know what you think in the comments.